Well this week I had a “close encounter” with The Battle Hymn of the Republic.  I understand that this sounds strange but there is no other way to describe it.

Dinner party this week ended in a discussion about the Civil War..involvement of the people of the area…and the Secret Six.  Of course everyone knows about Gerrit Smith and his membership in the Secret Six, but very few actually could name the other five members.., - Thomas Wentworth  Higginson, , Theodore Parker,  George Luther Stearns, Franklin Sanborn, and Samuel Gridley Howe.  Another interesting revelation was that Julia Ward Howe the poet and writer who penned the Battle Hymn of the republic was Samuel Gridley Howe’s wife.

The Battle Hymn was certainly the most memorable song to come out of the Civil War with Lorena, and Johnny Comes Marching Home …but little else was known about it.

So as usual I gave them a run down of its history….The song was written after a ride outside of Washington DC during the Civil War…But lets let  Mrs. Howe tell it in her own words:

"One day we drove out to attend a review of troops,
appointed to take place at some distance from the city.
In the carriage with me were James Freeman Clarke
and Mr. and Mrs. Whipple.

The day was fine, and everything promised well,
but a sudden surprise on the part of the enemy
interrupted the proceedings before they were well
begun. A small body of our men had been sur-
rounded and cut off from their companions, re-
enforcements were sent to their assistance, and
the expected pageant was necessarily given up.
The troops who were to have taken part in it were
ordered back to their quarters, and we also turned
our horses' heads homeward.

"For a long distance the foot soldiers nearly
filled the road. They were before and behind,
and we were obliged to drive very slowly. We
presently began to sing some of the well-known
songs of the war, and among them:

'John Brown's body lies a-moldering in the grave.'.
This seemed to please the soldiers, who cried,
'Good for you,' and themselves took up the strain.

Mr. Clarke said to me, 'You ought to write some
new words to that tune.' I replied that I had
often wished to do so.

"In spite of the excitement of the day I went to
bed and slept as usual, but awoke next morning in
the gray of the early dawn, and to my astonish-
ment found that the wished-for lines were ar-
ranging themselves in my brain. I lay quite still
until the last verse had completed itself in my
thoughts, then hastily arose, saying to myself, ' I
shall lose this if I don't write it down immediately.'
I searched for a sheet of paper and an old stump
of a pen which I had had the night before and
began to scrawl the lines almost without looking,
as I had learned to do by often scratching down
verses in the darkened room where my little chil-
dren were sleeping. Having completed this, I
lay down again and fell asleep, but not without
feeling that something of importance had hap-
pened to me."

THE song it is said made Abe Lincoln weep when he heard it and became his favorite...I told everyone this and after they left Back Street Barb Keough stayed on a bit and I so got out the computer and the guitar and we sung the verses as Mrs. Howe had written them.

Before Barb left I told her a story I loved…it goes that at one time Lincoln was at the theater and they were playing the “Battle Hymn” and it made Lincoln look up just in time to see the chandelier swinging and about to fall…he yelled for people to get out of the way…saving the day…Barb smiled and walked out to her car and left.

I thought to myself…hmm.. so I looked at the computer and found that Julia was born on May 27th which was a couple of days earlier..serendipity I thought..

Just then the huge maple tree next to my house collapsed on to the roof and also the  driveway where Barb had been 2 minutes earlier…. 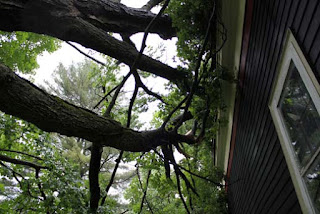 Strange I thought…..perhaps the Battle Hymn had struck a cord with the powers to be…..I wonder!...Hmmm

Listen and view and see if the song does not give you a shiver when you hear it!

*****
Oh yes..Gerrit Smith is credited with signing the Bail Bond for Jefferson Davis at the end of the Civil War..but Jefferson Davis was a member of the Mason Congressional Committee investigating the Raid at Harper's Ferry and the involvement of the Secret Six...when Smith went into the insane hospital after bank drafts with his name were found in John Brown's belongings.. Jefferson Davis and the committee did not persue Smith..the other members ran for fear of indictment.. with one exception...Higginson...a brave man.

As for Smith..I believe the Bail Bond was....."Quid Pro Quo"

Posted by Back Street Mary at 5:11 PM