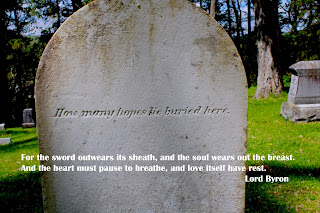 This has been an unusual few days. I have stated that I am retiring from history…and everyone says they don’t believe me.  History is your passion they say…you will be back!  Humorously, if I have something to say about it I won’t be!  There comes that moment when you no longer care…when the results no longer benefit the time, money and effort you have put into it.  And so…I am retired.

I did the cemetery tour for the last time today…tours we started back in 1995 and have carried out in October or on Memorial Day Monday since then.  The amount of information has been compiled I have written a book out on it…so I no longer have to do it I think.

As for the history of things…the history will always be there…it is up to the individual to discover it!  I have discovered much history in the Eaton Cemetery that has never been known and written about.  One such piece is the story of Mrs. Luna Chase Hammond’s History of Madison County.  This is a mammoth book put out in the 1870’s that covered the history of Madison County up to that time.  But as many times as I opened the book over the past 20 years I have wondered what ever happened to her brother James that helped her write it.

The answer to the quest for this answer came in a most unexpected way…by accident.  I was writing the book on the Eaton Cemetery and was researching the Chase Family graves, graves that include Luna Hammond the author, her mother Deiadamia Button Chase the first female Physician of Madison County and what appears to be 7 direct relatives who became doctors, some very famous in our area.  Among them was a Col. Julius Chase.

So I looked him up…and after a fashion I found him.  Lo and behold…there was the answer… Julius had become a member of the United States Historical Society in Washington, DC.  To qualify for this prestigious group he presented a book he had written… the book was called “The History of Madison County.”  Yes I had finally found James…he was Col. Julius Chase,,, buried right there with all of his famous relatives.  Who would have guessed!


So to you in the Blogosphere I will continue these little blog quests…but the rest I put to rest! More next Sunday!
Posted by Back Street Mary at 3:06 AM