The "Super Moon", Sacagawea, Lewis & Clark and Me!

Last night as the moon peeked from behind the clouds and trees… my whole house was bathed in silver, almost like a spotlight was on it.  I managed to make it out to the porch in the dark and sat gazing at the moon through the summer foliage on the trees.  What a sight…a surreal image that could have been from any of the two hundred years history of the house. 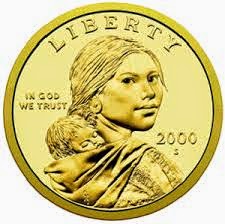 The scene made me think about the book I had just finished on the Lewis & Clark Expedition, the book is “Undaunted Courage” by Stephen E. Ambrose.  The book takes you on the trip across the then Louisiana Purchase and is a multi-year odyssey that looks for a water route to the Pacific Ocean.  We wander over the Great Divide, up raging rivers, and across untouched plains.

For any person who has been west to Yellowstone and Glacier National Parks it is way to relive seeing the Great Continental Divide and the high peaks, the Bitterroot Valley and the hot springs… but it makes you sad in a way that you are not there now enjoying the wilderness without electronics, TV, and the news.

It also points out what the west has lost with its vast herds of wildlife and its fast flowing rivers that have now been tamed in spots.  We can see the meadows filled with thousands of elk and bison, they… the beaver and his furry friends… were much the objects the hunt… not for food but for their hides…and of course for the money it brought.  Yes money it brought! Seems we have been a wasteful nation that has used its resources poorly for many years.

And there is Sacagawea, having just had a baby...tying it on her back in a baby-board and carrying it in wild canoe rides, on horseback across the mountains, through the prairies… to find her homeland of the Shoshone. Then acting as a translator (why they hired her husband) and female slave (in part) since it was she that would look for roots, put up and take down a teepee made of skin and…  she who goes unmentioned in her accomplishment on this trip until the end when Lewis wrote a letter to Charbonneau, Sacagawea’s husband saying, “Your woman who accompanied you that long dangerous and fatiguing route to the Pacific Ocean and back, deserved a greater reward for her attention and services on that route than we had in our power to give her!”  I guess nothing has changed for women huh!

Still in looking at that super moon last night, as I felt my wanderlust rising with the moon… I wished that I could have been there.  I wish I could go back to the dark of a time before lights and wandered it but for a day… in the scenes of yesteryear… before man tamed the land and pushed the poor Native Americans off and claimed it for his wealth.

**Today I understand... in places you can see and hear the gas and oil derricks & compressors, as well as view some oil spills on the way!  After money again!

Posted by Back Street Mary at 6:24 AM